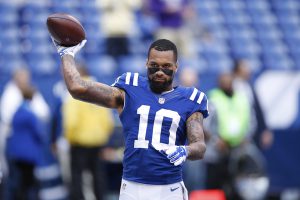 The 2016 season is rapidly approaching, and it will pave the path for some NFL players to evolve into stars.

Certain rookies that turned heads last year should be poised for major breakouts in their second season. Meanwhile, some third- and fourth-year guys were thrust into action and far exceeded expectations, earning a chance to receive even bigger roles.

The following players are the top 10 NFL players who could easily become household names during the 2016 season.

Moncrief nearly doubled his production on all levels during his sophomore season. Impressively, this was accomplished playing under less-than-ideal quarterback circumstances in 2015.

Bound to break out in his third year with quarterback Andrew Luck back and healthy, Moncrief should continue to impress. Considering his route-running improved while catching passes from an array of different quarterbacks in 2015, further growth is inevitable.

Plus, Moncrief won’t have tight end Coby Fleener or Andre Johnson competing for targets and touchdowns.

All indicators would suggest that Moncrief should be up for a quite productive year.

Ertz is emerging as one of the league’s up-and-coming tight ends after making steady progress throughout three seasons with the Eagles.

Last year, he recorded a career-high 75 receptions for 853 yards. Unfortunately, only two touchdowns were managed.

After signing a new deal during the offseason (details here), Ertz notably received a hefty amount of targets during spring practices.

Furthermore, enhancements made to the Eagles offensive line should keep Sam Bradford better protected with more time to seek out Ertz downfield.

During his limited participation in 14 games and only two starts, Rollins registered some pretty awesome numbers in his rookie season.

In a star performance against the Rams last October, Rollins made two interceptions. This marked the first time in 13 years that a Packers rookie accomplished two picks in one game.

Rollins will be on target to receive more field time, likely as a nickelback, due to the free agency departure of corner Casey Howard. Though, it is reported that he could receive some work on the outside as well.

As it stands, Rollins should be salivating at the idea of facing the NFC North’s interception-prone quarterbacks in Jay Cutler, Matthew Stafford and Teddy Bridgewater six times this year.

McKinnon may be seeing more snaps when the offense employs the shotgun approach to jump-start the Vikings’ woeful passing game.

Upon evaluating the team’s current running backs efficiency when lined up in shotgun formation, McKinnon impressed with an average of 4.3 yards per carry. This is compared to the 1.6 yards per attempt that Adrian Peterson averaged in the same role last year.

McKinnon saw his stats drop overall from his rookie campaign when Peterson resumed his lead rushing duties last season. However, to get the team out of its rut as the 31st-worst ranked passing offense, Peterson’s workload could diminish.

Keeping Peterson, who is 31, in good health is vital. Therefore, it would make sense to ease up on his role and give McKinnon more opportunities.

The third year in the NFL may just be the season Ebron makes a household name for himself and lives up to the expectations of a first-round pick.

Last season, he saw an increase in targets and his catch rate improved dramatically to 67.1 percent compared to 53.2 percent from his rookie campaign. Ebron also found the end zone five times in 2015 and more than doubled his receiving yards.

He finished as the third-best pass catcher on the team after wide receivers Golden Tate and Calvin Johnson.

With the departure of Johnson, Ebron stands to attract even more looks from quarterback Matthew Stafford. Even with the added presence of wide receiver Marvin Jones, it is conceivable that Ebron could once again double his production.

This could catapult him into the 1,000-yard territory mark, and hopefully his touchdown production will increase as a result.

“The third year … it’s about time to just buckle down and compete with everybody,” Ebron said recently, per Tim Twentyman of the team’s official website.

Ealy evolved in his second season, when over the course of 16 games and nine starts he recorded five sacks and 32 combined tackles.

A pivotal moment in his early career was his outstanding three-sack performance against Peyton Manning in Super Bowl 50. Ealy’s Panthers did not win, but his performance (which also included an interception, a fumble recovery, a forced fumble and four combined tackles) was simply amazing.

Now that Jared Allen has finally decided to ride off into the sunset (literally), Ealy is penciled in as the Panthers’ starter at right defensive end.

When the Panthers passed on selecting any pass rushers in the 2016 draft, it showed their faith in Ealy moving forward.

Johnson was not much of a factor in the Browns’ rushing game last season due to the presence of fellow back Isaiah Crowell.

Although, the rookie did run up quite the impressive stats when it came to receptions. Featured as a starter in seven games while seeing snaps in all 16, Johnson racked up a total of 61 catches resulting in 534 yards and two touchdowns. Commendably, Johnson also caught 82.4 percent of the passes that came his way.

For his accomplishments, Johnson ranked fifth among running backs in receiving yards.

Considering the Browns lack any “wow factor” type of wide receiver, Johnson looks poised for a large load of dump passes once again.

Furthermore, he should benefit from the fact that the Browns constantly battle from behind. Having to often ditch the run game should keep Johnson plenty involved on offense.

Aiken received an opportunity to shine quite brightly due to the slew of injuries that hit the Ravens offense last year.

After some up and down weeks during the start of the year, he averaged 10.3 targets and 76.4 yards per outing in Weeks 10-17. Considering Aiken had yet to start in a NFL game, he was pretty darn impressive. Notably, he dealt with the adversities of the Ravens revolving backup quarterbacks perfectly fine.

Aiken appears to be heading into training camp as the No. 2 receiver opposite Steve Smith Sr. He should eventually inherit Smith’s top spot once the veteran retires. Even with second-year receiver Breshad Perriman presumably available to play, Aiken proved far too efficient to be used sparingly moving forward.

Ray didn’t start in his rookie season. Though, in 14 games he played, he registered a respectable four sacks and 20 combined tackles. He was also productive in the Super Bowl when he recorded a couple of tackles and a forced fumble.

Ray has reportedly bulked up to 245 pounds versus the 234 he weighed as a rookie. It is also reported that the Broncos are planning to have Ray involved in more snaps. Meanwhile, veteran fellow linebacker DeMarcus Ware will fill a complimentary role.

“He’s ready to make the jump,” coach Gary Kubiak said via Jeff Legwold of ESPN. “We’re expecting big things from him coming up.”

Ware turns 34 this summer and is playing in his final season of a three-year deal with the Broncos. We will surely be seeing more of Ray this fall so he can get up to speed to eventually fill Ware’s shoes.

White spent his entire rookie season sidelined due to a shin injury. Though, the time he spent observing his team was put to good use.

White claims this year will be a “lot easier” now because has had extra time to learn the Bears offense and build his rapport with quarterback Jay Cutler.

And, boy could Cutler use another weapon in the backfield other than a dinged-up Alshon Jeffery. Tight end Martellus Bennett is gone, as is pass-catching running back Matt Forte.

White is 6-foot-3 and speedy. He should be an excellent option for Cutler, who achieved a career-high 92.3 quarterback rating in 2015.

Cutler’s evolution, coupled with White’s presence, is sure to help bolster a Bears passing game that ranked within the bottom 10 last season.