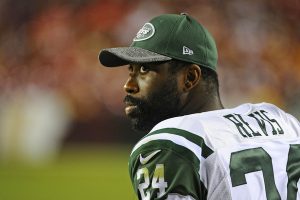 Week 1 in the NFL started out with tons of thrills. It all began when the Denver Broncos came from behind and beat the Carolina Panthers by one point on Thursday Night Football.

Now, we have several other exciting battles to embrace when the next series of games get underway. The following four match-ups should turn up the heat when some of the league’s top stars come face to face.

At the age of 31, Revis is still one of the most skilled corners in the business.

Although, the task of keeping Cincinnati Bengals wide receiver A.J. Green contained will be a tall one. The New York Jets will be enlisting extra help to cover Green.

“It won’t just be Revis,” defensive coordinator Kacy Rodgers said Thursday, per Connor Hughes of nj.com. “It’ll be a lot of people.”

Green is bound to see an increase in targets after the Bengals lost two of their top receivers in free agency this past offseason. Furthermore, tight end and red zone viper Tyler Eifert will be sidelined.

Green stands 6-foot-4 and is 205 pounds. He is extremely agile and an utter terror for opposing secondaries to defend. Last season, Green tallied 86 catches resulting in 1,297 yards and 10 touchdowns.

Revis also saw a boost in production from his previous season when he recorded five interceptions and four fumble recoveries in 2015 after returning to the Jets.

Both Green and Revis will have to be on their toes to outplay the other this Sunday. The fact that the Jets are planning on double or even triple covering Green only magnifies what a true threat he is.

This Jacksonville Jaguars rookie defensive back is not afraid to take on one of the NFL’s most elite quarterbacks.

In fact, the first-round pick is literally daring Rodgers to challenge him (more on that here).

Some might consider Ramsey as cocky. Or, perhaps he is just confident. And, that is all good.

Ramsey might be reacting to the fact that Rodgers sometimes avoids throwing the ball towards top corners. Seattle Seahawks cornerback, Richard Sherman was actually upset when Rodgers ignored him in a previous game.

The rookie will be tasked with covering either Jordy Nelson or Randall Cobb. Both are excellent red zone threats for Rodgers.

The Jaguars defense was horrific in stopping the pass last year. It allowed a total of 268 passing yards per game and managed only 19 takeaways.

Clearly, this is why the Jaguars selected the Florida State standout. And, what better way to baptize Ramsey into the NFL fire than to let him tango with Rodgers and Co.

Patriots backup quarterback, Garoppolo begins Week 1 with a daunting tilt on the road against the Arizona Cardinals. Fortunately, he looked quite polished in the preseason.

The young quarterback must not turn the ball over.

Making things interesting, trusty red zone target tight end Rob Gronkowski will not be playing in Sunday’s game. This puts the onus on Martellus Bennett to produce in Gronk’s absence. If Garoppolo struggles through the air, he will have to rely James White and LeGarrette Blounte to carry the team on the ground.

Should Garoppolo pull off a win, he will have have the toughest of his four games behind him. Based on comments made by Cardinals defensive end Calais Campbell, though, Arizona doesn’t foresee a happy outing for the quarterback (more on that here).

We can bet that Tom Brady will be smiling ear-to-ear from his couch Sunday evening if his Patriots are victorious.

Things should be interesting when the NFL’s self-proclaimed “best cornerback on Earth” takes on one of the league’s most elite wide receivers.

Norman will most assuredly be in charge of lining up opposite Brown, who averaged a ridiculous 8.5 catches and 114.6 yards per contest last year. It should be a spectacular battle to track.

Norman established some career-bests in 2015 with the Carolina Panthers. He is now playing in a different scheme, so Brown could establish the upper hand.

This matchup will be a hot one. But hopefully not hot in a heated temper kind of way. We’ll save that for when Norman and New York Giants wide receiver Odell Beckham Jr. face off, twice, later this fall.