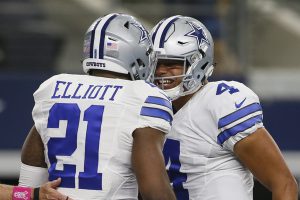 A pair of rookies walked into Lambeau Field and powered the Dallas Cowboys’ 30-16 thrashing of the Green Bay Packers on Sunday.

“I tell them all the time, rookie is just a title,” Bryant said, via ESPN. “That’s all it is. These guys are dominant. They are the real deal.”

Prescott threw three touchdown passes, including a 1-yard score to Cole Beasley to finish off a dominant opening drive and a 20-yard toss to Brice Butler with 27 seconds left in in the first half. He threw his first career interception, but the rookie quarterback otherwise outplayed Aaron Rodgers in his own house.

Elliott was even better. The rookie running back carried 28 times for 157 yards against the NFL’s top ranked run defense. He remains the NFL’s rushing leader at 703 yards, putting Elliott on pace for 1,875 yards in 2016.

Only Eric Dickerson has rushed for more yards during his first six career games.

Prescott also made history, setting the new longest attempt streak without an interception to start an NFL career:
Dak Prescott had 176 pass attempts before his 1st interception, longest streak in NFL history to start a career

The Cowboys are now 5-1, joining the New England Patriots and Minnesota Vikings as the only three teams with five wins through the first six weeks. There’s no way Dallas would be in this position without Prescott and Elliott, one of the most impressive rookie pairs in NFL history.

But as Bryant knows, rookie is just a label we put on first-year players. Prescott and Elliott don’t look like rookies.