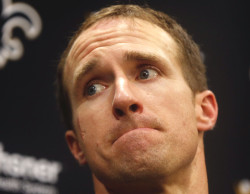 The Saints and quarterback Drew Brees still haven’t worked out a new deal that reduces his salary-cap number for 2016 below $30 million. There’s now an apparent deadline for getting a deal done.

“I don’t like to talk about contracts during the season,” Brees said Wednesday, via the Associated Press. “If you remember in 2011, where it began to drag into the season, three weeks in I was like, ‘I don’t want to deal with it anymore. I want to focus on football, focus on the season.’ That has always been my approach. That’ll be my approach again. There’s a deal to be done now, and if it doesn’t get done now, it’ll be a different deal to get done at the end of the year.”

That’s the closest Brees or his agent have come to pointing out the reality that, if the Saints allow Brees to play out the final year of his five-year, $100 million contract, the circumstances will change, dramatically. They’ll change thanks to the arbitration claim filed by Brees after the Saints applied the franchise tag to him in 2012, which resulted in a ruling that the next application of the tag to Brees will be the third of his career. As a result, he’ll be entitled to a 44-percent increase over his cap number from 2016.

This means that the Saints likely wouldn’t apply the tag to Brees, allowing instead for the market to set his value. Which creates the very real possibility that someone else will offer Brees dramatically more than the Saints will offer. Which, in turn, sets the stage for the possibility of Brees changing teams after what will be his 11th season in New Orleans.

While Brees leaving remains a long shot, teams use the franchise tag to keep key players off the market. When a player has a chance to go to the market (e.g., Ndamukong Suh), anything can happen. And with plenty of teams always searching for franchise quarterbacks, someone out there surely would love to have a Favre-in-Minnesota year or two with Brees.