Originally posted on The Sports Daily | By Mike Batista | 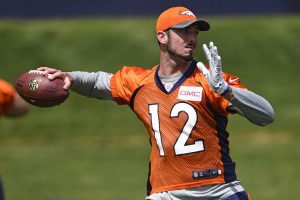 The 2016 NFL season is fast approaching and organized team activities are in full swing. Thirty-one teams held OTA sessions this week. The Rams begin theirs on May 31.

These practices aren’t in pads, so there’s only so much that can be taken from them. But it’s the first time the rookies and veterans are practicing together, so these OTAs can provide a sneak peek into how 2016 will shape up.

Here are eight takeaways, one from each division.

Tight end Martellus Bennett, who the Patriots acquired in a trade with the Bears, was the “best player on the field” in Thursday’s OTA session according to Karen Guregian of the Boston Herald.

Rob Gronkowski was absent, and it’s fair to ask how Gronkowski and Bennett can co-exist in the Patriots offense.

Putting both tight ends on the field at the same time could reduce the double teams that Gronkowski faces, which would make him all the more dangerous. Opposing defenses will have to account for the 6’6″, 273-pound Bennett, who caught 90 passes two years ago and 53 last season.

The Patriots don’t have that home run-threat wide receiver, so instead Tom Brady has thrived with possession receivers like Julian Edelman and Danny Amendola. Bennett gives Brady yet another intermediate target. Perhaps the Patriots are loading up on these short-range weapons in case the soon-to-be-39-year-old quarterback’s deep-ball ability starts to diminish.

Watch out for T.Y. Hilton

The Colts experienced a down year in 2015. They missed the playoffs for the first time in the Andrew Luck Era.

It also was a down year statistically for Colts receiver T.Y. Hilton. After two straight years of catching 82 passes, Hilton caught just 69 last year. Luck’s injuries might have had a lot to do with that.

Sparked by the anguish of watching the NFL playoffs on TV instead of being a part of them, Hilton has been the star of the Colts’ OTAs according to the Indianapolis Star via Pro Football Talk.

The Colts drafted three offensive linemen, including presumptive starting center Ryan Kelly, in an attempt to keep Luck on the field. If Luck can stay healthy and Hilton’s drive makes him an elite receiver, the Colts’ 8-8 season could be nothing more than a hiccup.

There could be life after Alex Mack for Browns

One of the Browns’ few strengths seemed to take a big hit in the offseason when three-time Pro Bowl center Alex Mack signed with the Falcons and right tackle Mitchell Schwartz, who never missed a game in four years, went to the Chiefs.

However, Browns associate head coach-offense Pep Hamilton said that Cameron Erving has “stepped up” at center, according to the team website. Erving, drafted 19th overall last year, started four games at guard and is moving to his more natural position.

At right tackle, the Browns acquired 24-year-old Alvin Bailey as a free agent from the Seahawks. They also drafted Shon Coleman in the third round. Coleman, 25, is older than most rookies and might be a better fit at right tackle because pass protection isn’t his strong suit. Not that the Browns need a left tackle. Six-time first-team All-Pro Joe Thomas remains.

One OTA practice doesn’t solve a quarterback controversy, but Broncos rookie Paxton Lynch’s arrow seems to be pointing in the right direction.

The 26th overall pick in the draft held his own against the Broncos’ Super Bowl-champion defense.

Cecil Lammey ‎@CecilLammey: #Broncos Chris Harris Jr. likes what he’s seen from QB Paxton Lynch “I think for the first day coming out against us…he did a great job.”

Multiple observers were impressed with Lynch’s footwork. He’ll get extra reps with Mark Sanchez expected to sit out OTAs while he recovers from thumb surgery.

So far, it’s looking like the Broncos have earned a thumbs-up for trading up from No. 31 to No. 26 in the first round to draft Lynch.

Tony Romo is in one piece

The Cowboys’ prospects for 2016 and the entire complexion of the NFC East are so much different with Tony Romo healthy.

Romo has been a full go at OTAs two months after undergoing shoulder surgery, according to the Fort Worth Star-Telegram.

Romo is ahead of schedule in his shoulder rehab and has actually been doing more than he has in past offseasons because he’s not coming off any back surgery.

Assuming Romo stays healthy, it likely will take better than a 9-7 record to win the NFC East this year.

Jared Cook could have breakout season in Green Bay

Jared Cook’s one-year, $2.75 million contract could turn out to be a bargain for the Packers.

The tight end has looked good so far in OTAs, according to the team website. The 29-year-old has spent his career in Tennessee and St. Louis, both wastelands for skill-position players on offense. Since 2011, his reception total has ranged from 39 (2015) to 51 (2013). That number could spike with Aaron Rodgers throwing passes to him.

Since Rodgers took over as the starting quarterback in 2008, no Packers tight end has caught more than 61 passes in a season. Cook could add a dimension that makes the Packers’ offense scary.

Howard Jones had five sacks and returned a fumble for a touchdown in five games for the Buccaneers last season. He made plays on defense in the 2015 preseason, but the Steelers couldn’t find a place for the linebacker and cut him. The 6’4″, 238-pound Jones was signed by the Steelers as an undrafted free agent out of Division II Shepherd University and spent the 2014 season on the Steelers’ practice squad.

The Bucs moved Johnson to defensive end after picking him up last year, and with Jacquies Smith out on Tuesday Jones worked with the first team at OTAs according to Buccaneers.com.

Jones might have some hurdles to clear on the depth chart, but if he can make the leap from Division II to the NFL it’s hard to doubt his ability to make a real impact at some point.

Seahawks could have problems on offense

The Seahawks will always be Super Bowl contenders as long as their defense remains elite.

Considering the question marks on offense, that defense might have to be nothing short of elite for the Seahawks to have any hope of getting back to the Super Bowl in 2016.

Seattle’s offensive line is a mess. A year after trading center Max Unger to the Saints, the Seahawks lost left tackle Russell Okung to Denver and right guard J.R. Sweezy to Tampa Bay in free agency. The good news is that first-round pick Germain Ifedi might not be a reach after all and could slide in to replace Sweezy at right guard. The bad news is the Seahawks acquired J’Marcus Webb. It’s not that they’ll need Webb to start, it’s just that the name “J’Marcus Webb” isn’t exactly synonymous with stellar offensive line play and his presence suggests the Seahawks are desperate for bodies to fill out the depth chart.

Justin Britt, a tackle in 2014 and a guard last year, lined up at center and snapped the ball over Russell Wilson’s head in Thursday’s OTA session according to SeattlePI.com. He has a few months to get that snap thing down but it’s not a good look.

Regarding skill-position players, Jimmy Graham (knee) and Thomas Rawls (ankle) are recovering from injuries and aren’t guaranteed to be back by training camp.

Russell Wilson threw a career-high 34 touchdown passes last year, but he and the Seahawks could take a step back in 2016 if the offense doesn’t take shape.