Originally posted on The Comeback | By Andrew Coppens 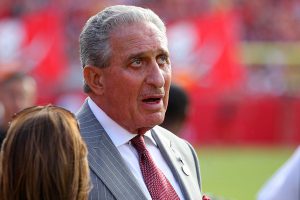 There’s little doubt that the city of Las Vegas is one of the hottest markets and biggest growing cities in the country. However, there’s a difference between that and a city being able to support an NFL franchise.

It’s that worry that has Atlanta Falcons owner Arthur Blank believing there needs to be more studying before any decision can really be made on the move of the Oakland Raiders to Sin City.

“I want to see all the research on whether [Las Vegas] can support a franchise or not. It’s no different than any other city we look at.”

One of Blank’s concerns appears to be the size of the market, but with a population of two million people and little signs of the growth stopping, the market seems poised to be able to handle an NFL franchise.

It’s an interesting tactic, as perhaps fellow NFL owners are looking at the lessons learned from the tough sell of the Jacksonville Jaguars franchise over the past 15 years or so. Jacksonville, with a population of just over 800,000 people has struggled to support its franchise.

Part of the issue with the Vegas market is no doubt the amount of transplants to the city with already established NFL fandom ties. Breaking those bonds and building a sense of community with a franchise that is already established and just re-locating could be interesting.

However, it appears one of the outward concerns many talk about with any move of a professional team to Las Vegas — gambling — isn’t as big of a concern for Blank.

“I think, obviously, we’d have to build a wall around the football operations and the franchise itself, which I think they can do effectively,” Blank said. “That [gambling] opportunity exists in any market.”

Clearly, Blank and other owners are aware of the wants of fellow owner Mark Davis, and with commissioner Roger Goodell softening away from his hard-line stance on any team moving to Las Vegas it could be an interesting year ahead for the league.

While Blank has reservations, and Goodell seems to be taking a cautious approach to any team in Vegas, Dallas Cowboys owner Jerry Jones isn’t afraid to see the possibilities for the league in a city such as Las Vegas.

“It has a flair for entertainment, and it has two million people, and they’re avid sports fans, the full-time residents,” Jones said at a golf tournament this week. “They have a huge visiting contingent that more often than not are fans of some NFL football teams. You add all that together, and it’s certainly in a conversation about the future relative to the NFL.

“As you well know, you have to have the right situation. You have to have the right ownership want to, and then a lot of other considerations that have to come into play. For me, I think that certainly the fact that Las Vegas has a gambling aspect to it is far overshadowed by the entertainment value, if you will, family appeal that you have, the convention appeal. So it does not have disfavor with me, in my opinion, relative to being an NFL city.”

Blank’s public statement about being willing to research and consider the Las Vegas market is also interesting, as it flies in the face of a statement from New York Giants ownership back in March:

Mara: Las Vegas a non-starter for most owners as far as a Raiders move there. “[The casinos] would be a big part of [owners’ objections].”

Whether or not a move to Las Vegas happens for an NFL franchise right now, it seems as if it is just a matter of time before some league makes a move to the lucrative and growing market.