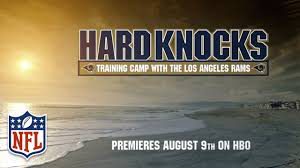 On Tuesday night, “Hard Knocks” will return to your television. This is good news for people who are fans of smart, entertaining football content. The NFL Films production — which debuted at Baltimore Ravens camp way back in August 2001 — has become a stalwart franchise for HBO, providing fans with a behind-the-scenes look at how the sausage is made. No small feat when you’re talking about the members-only world of the NFL.

“Absolutely, there’s a challenge. The nature of training camp is just so repetitive and redundant,” Dissinger said. “You’re going to have your first day of camp, your first day of pads. And I think we take a lot of pride in ourselves in making those things unique to each environment. Really, it comes down to the characters and the people.

“That’s the difference between teams. There’s not a lot of variation in terms of how they run their camps, but you find the people. Like last year, Charles James, or E.Z. [Nwachukwu], those are unique to the Texans. J.J. Watt is obviously unique to the Texans. My group prides themselves on finding out who those people are here and getting with them and documenting them as early as possible.”

“You can do as much research as you can on these rookies and undrafted guys, but there’s not a whole lot out there on them,” Dissinger said. “It’s only when you get in person and you talk to them and you’re around them at practice. Wow, that guys sounds interesting. He’s a little bit funny. Let’s ask if we can wire him tomorrow. So it’s just an ongoing process that really never stops.”

Ultimately, a “Hard Knocks” season is often defined — or at least remembered — by a scene. In Kansas City, it was the Bernard Pollard dance. In New York, it was Rex’s G-D snack speech. In Miami, it was Chad Johnson learning his career was over. Dissinger’s job is to find those moments. Does he immediately know when an iconic “Hard Knocks” moment is in front of him?

“A lot of times, yes. I’ve been doing this long enough where I think I’m good enough to recognize, That was pretty special,” he said. “Last year, there was a speech that Bill O’Brien gave. And I remember listening to it on the field, and I don’t do any editing, but I could picture exactly how that was going to end up and it was just such a fantastic speech.

“Hard Knocks” hasn’t been immune to criticism. When I spoke with Arizona Cardinals coach Bruce Arians at the “All or Nothing” premiere in June, he explained why he was open to participating in NFL Films’ newest documentary series but had no interest in the flagship program.

“My problem with ‘Hard Knocks’ has always been the sensationalism of guys getting cut,” Arians said. “Reality TV, seeing dreams come to an end. [‘All or Nothing’] has none of that.”

I recently asked Dissinger about that criticism, which we’ve heard in different forms for years in NFL circles. Dissinger strongly disagreed with the notion, calling the coverage of camp cuts “inevitable,” given the nature of the show.

“I don’t believe that we take these things and exploit a player for fun. I think a documentary series is to document what happens, just the same as you would if a player has a great game or if he gets criticized in a meeting. This is not a scripted reality show. We didn’t write the cuts into the show. It’s just a matter of course for what happens in a training camp.”

Hard Knocks premieres Tuesday, August 9 at 10 p.m. ET on HBO. You can read episode recaps from Dan Hanzus every week.

Cancel reply
Eight NFL coaches on the hot seat in 2016
Report: Broncos trying to trade Sanchez, who could be cut
To Top