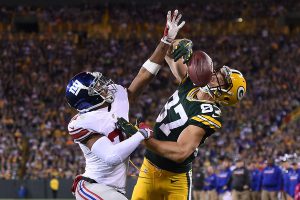 Trevin Wade of the New York Giants defends a pass intended for Jordy Nelson of the Green Bay Packers during a game at Lambeau Field on October 9, 2016. The Packers defeated the Giants 23-16. The two teams will meet again Sunday in the NFL Wild Card. Stacy Revere/Getty Images

During the regular season, we let you know how many times you could stand to get away from any given afternoon slate on Sunday. This isn’t the regular season; it’s the playoffs, when everything is ramped up to the Nth degree and whatever other high degrees you might be familiar with. So here’s where we lay out what ridiculous situation would have to play out for you to abandon watching any given postseason game.

Okay, we probably shouldn’t start out with this one, which features the quarterback quality equivalent of long eliminated teams meeting in Week 16. But it’s still an elimination game and as much as your media diet wants to tell you it’s a total waste based on the quarterbacks starting, there’s plenty of talent on display elsewhere. If you can’t get past the QBs, there’s always the upside is you can see Osweiler get booed immediately at a home playoff game. If he’s bad enough, the Raiders dream season doesn’t necessarily have to end. That said, if they advance, there’s a good chance they’ll be matched up in the postseason with the Patriots for the first time since the Tuck Rule game with very little chance for vengeance.

What Could Drive You Away: Is that darts I see on ESPN2?

3 Week Diet – Isn’t It About Time To Feel Better About Yourself?

Normally, this would be a prohibitive blowout loss for Detroit on the road, especially with Matt Stafford suffering from an injured finger on his throwing hand, but Seattle has been a little vulnerable of late and missing Earl Thomas, so there’s a slightly lower chance of that happening. Nevertheless, the Lions are limping into the postseason and were 0-5 this season against fellow playoff teams. All you can say for them is they’re good at hanging around and stealing wins from lesser teams. It would take a swift turnaround for them to pull the upset in one of the hardest places to win in the NFL. The Seahawks also signed an over-the-hill Devin Hester handle return duties this week, so it may be an opportunity to say goodbye to an old friend.

What Could Drive You Away: Having a social life, plans on a Saturday night, sex-having.

Viewers might be dissuaded by Matt Moore starting since he’s been ensconced on the bench the last five years, but he’s basically an approximation of Ryan Tannehill’s skill level. The Dolphins won the first meeting in the regular season in Miami and Jay Ajayi ran all over the Steelers defense. That might still happen, though at least now Pittsburgh’s offense is clicking. When the teams met earlier in the year the Steelers accused Ndamukong Suh of kicking at Ben Roethlisberger’s injured knee. More of that is always a possibility with Suh on the field, and it would a worthy follow-up to the brutal Wild Card game Pittsburgh played in last year.

What Could Drive You Away: A sensitivity to sight of blood, sensibilities that are easily offended by Antonio Brown touchdown dances.

The marquee game of the weekend features Big Blue’s third postseason trip to Lambeau in the past decade. The previous two resulted in Giants victories en route to Super Bowl victories. Should New York fail to defeat a surging Packers team, a great tut-tuting will be leveled at Odell Beckham and the New York receivers for taking a day off early in the week to have fun on a boat, a story that even Eli Manning was able to joke about but nonetheless drew extremely serious scorn from members of the New York media brigade. That’s as compelling a reason to back the Giants as any. If you can put all the nonsense aside, this has the makings of a genuinely good game featuring two coaches who look like they belong on the couch next to you on a lazy Sunday. Or, in Ben McAdoo’s case, still on your couch in the middle of the day on Tuesday.

Mike Tunison is a freelance writer based in Alexandria, Va. and the former editor of Kissing Suzy Kolber. You can follow him at @xmasape on Twitter.

3 Week Diet – You Can Change Your Life Today – Just Do It NOW!