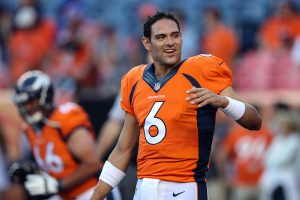 The Denver Broncos are reportedly working behind the scenes to trade quarterback Mark Sanchez after naming Trevor Siemian the starter for Week 1.

It was previously reported that Sanchez could be a salary-cap cut if he didn’t win the starting job. At this point, it seems it’s a given he won’t be on Denver’s roster in 2016.

If not, then the Broncos would save $4.5 million and wouldn’t have to give the Philadelphia Eagles the seventh-round pick that was part of the bargain to send Sanchez to Denver.

The veteran quarterback struggled in training camp with turnovers and continued to do so during the preseason. He threw an interception and lost two fumbles in just 30 pass attempts, which is an extension of what we’ve seen throughout his career.

There are some dire quarterback situations across the league. That said, it’s hard to imagine a team would trade for Sanchez at this point, given the fact he’ll be on the open market soon anyway when he gets cut.

One logical landing spot is the Dallas Cowboys, who just found out over the weekend that Tony Romo is likely out for at least six weeks.