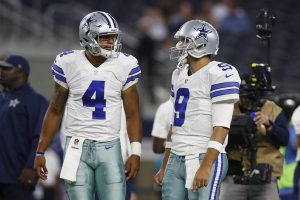 The Dallas Cowboys opted to keep Tony Romo on their active roster, which means they anticipate him being healthy enough to play before Week 9. But if Dak Prescott enjoys great success and the Cowboys win games, will Romo be returning as a backup?

Ian Rapoport of NFL Network said Sunday that Dallas has not ruled out the possibility of Prescott taking Romo’s job.

“From my understanding, talking to Cowboys people over the last several weeks, the door is open, though slightly, for Dak Prescott to come in and impress enough and potentially take Tony Romo’s job, which is something that would have sounded crazy just a couple months ago,” Rapoport said. “In fact, when I talked to Stephen Jones a couple weeks ago, he actually brought up, himself, the Brady-Bledsoe comparison from 2001.”

Unlike last season when the Cowboys were completed deflated after Romo went down, Rapoport says this year’s team genuinely believes in Prescott after the rookie’s impressive preseason.

“This year is much different from last year. They are not sitting around waiting for Tony Romo to return,” Rapoport added. “The confidence in Dak Prescott is palpable. They are going forward with him and whenever Romo returns, they will address that when it comes.”

Of course, Prescott has yet to play a single snap in the regular season. When opponents start game-planning for him, life could become more difficult.

Any talk of Prescott pulling a Tom Brady is extremely premature, despite what one NFL analyst said earlier in the week. If The Cowboys are in a position where they’re debating handing Prescott the starting job for good, that will be a good problem to have.