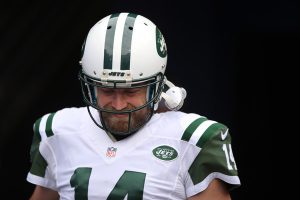 Are the New York Jets growing tired of their ongoing contract negotiation with Ryan Fitzpatrick?

The Jets have offered Fitzpatrick a three-year deal that is reportedly worth $24 million, with $12 million of that being paid up front and $6 million per season in 2017 and 2018. Since that is basically backup money, Fitzpatrick is not interested. He would, however, be open to signing a one-year deal worth $12 million, but the Jets don’t want to take that kind of cap hit for 2016.

So where does that leave the two sides? Since Fitzpatrick has not signed a contract with another team, it’s safe to assume the Jets aren’t low-balling him that badly. In fact, Manish Mehta of the New York Daily news told PFT Live on Thursday that the team is closer to moving on than people think.

“I think it’s coming a lot sooner than some people might expect, and if you’re in the Jets’ position I think your patience should be wearing thin,” Mehta said. “The Jets are probably a bit closer to moving on than has been talked about at this point.”

Fitzpatrick set a Jets franchise record with 31 touchdown passes last season. New York’s veteran wide receivers have gone to serious lengths to let the team know they want Fitzpatrick back, yet there is still no deal in place. Earlier this week, there was speculation that Fitzpatrick could sign elsewhere for less out of spite.

If what Mehta reported on Thursday is accurate, the Jets might breathe a sigh of relief if Fitzpatrick ends up moving on.