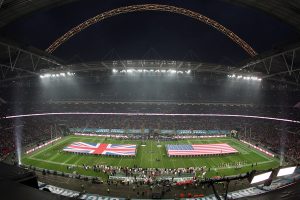 Given the yearly trips to London, it’s not surprising to hear that the league is strongly considering a more permanent presence in Great Britain.

NFL insider Jason La Canfora of CBS Sports is reporting that one of the topics of conversation at the last owners meeting was a logistical look at moving an NFL team to London.

“It was a major topic of conversation among the owners last week, according to numerous league sources,” La Canfora writes. “Mark Waller, who heads the NFL’s International arm, gave a detailed progress report and presentation to the owners at that meeting that led many teams to come away more convinced than ever that this is something Park Avenue very much wants to happen.”

There are a number of things to work out, obviously. Interestingly, the biggest concern isn’t what you might think. The league owners are being asked to consider how things will be handled once the London team eventually does make the playoffs and has to travel all the way across the states to the west coast.

La Canfora notes this is all still years away from becoming a reality. But the reality is that the NFL is eagerly and forcefully investigating what it would take to feature an NFL team in London. The biggest question this scribe has is whether or not that would mean an expansion to make it 33 teams or if one of the existing 32 teams would move across the pond.

Given the already diluted product we’re seeing from week to week — especially at the quarterback position — an expansion might not be a great idea. But if a current team were to move, then it wouldn’t have as much of an impact on the quality of play from that perspective. On the other hand, the issue of jet lag could be problematic, which definitely could affect the quality of play.

The NFL has been pushing for more international appeal for years now. Moving to London would further the league’s goals in a massive way, so it seems inevitable that this will eventually happen. Whether or not it’s a good thing for the players and fans remains to be seen.

Cancel reply
Report: Jets could move on from Ryan Fitzpatrick
Top 10 takeaways from the NFL offseason
To Top