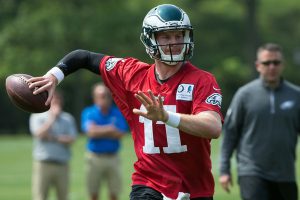 It’s still early, but as of now, it appears Sam Bradford is having a hard time keeping up with rookie Carson Wentz learning the new Philadelphia Eagles playbook.

“Wentz has shown a plus-NFL arm, accuracy to make every throw on the route tree and an ability to move in the pocket and buy time,” Matt Lombardo of NJ.com writes. “Not for nothing, but Wentz also seems to be ahead of Bradford in terms of mastering Doug Pederson’s offense.”

One wonders if this has anything to do with Bradford’s mini-holdout when he tried to get himself traded in protest of Philly selecting Wentz No. 2 overall in the 2016 NFL Draft. It wouldn’t seem to make much of a difference, given the fact Bradford was there when OTAs began. But perhaps his head still isn’t completely in the game.

Or, perhaps Wentz is just better at soaking up new information.

If that’s the case, considering all the other superlatives we’re hearing about the youngster at this time, maybe nobody should be shocked if Wentz ends up starting for the Eagles, sooner rather than later.