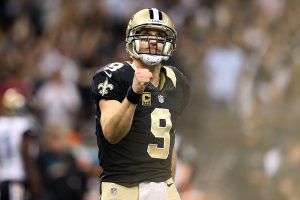 The 2016 NFL season marks a new start for rookies and players who just inked new contracts. On the other side are guys who will be playing in the final year of their deals.

Due to the way certain NFL contracts are configured, some players stand to cash out quite grandly compared to their peers this year.

Unless they agree to restructure and extend their current contracts, the following six players stand to collect a hefty paycheck in 2016.

If the Saints and Brees do not come to an agreement on an extension that would soften his gigantic $30 million cap hit, Brees will be the highest paid player in 2016.

Reportedly, Brees is more than willing to restructure the $30 million to pay out over a longer term of service. But he is a man who will not wait indefinitely. Brees put the Saints on alert that they have until September to negotiate. After that, he wants to focus on football and will be open to discussions next year.

Brees is one of the best quarterbacks in the NFL. At 37 years old, he has averaged an incredible 5,127 yards per season over the last five years. He has also stated in the past that he plans to play until he is at least 40.

Brees’ contract situation is one that New Orleans cannot sweep under the rug forever.

Like Brees, Fitzgerald has been willing to shuffle around his contract to free up cap space for his team throughout his career.

He last restructured his contract early in 2015. Now it is time for Fitz to cash in on the $15.85 million owed to him in 2016. Provided the Cardinals don’t ask Fitzgerald for another favor, the veteran wide receiver will earn more than any of his fellow wideouts this year.

Fortunately for Fitzgerald, the fountain of youth kicked in last season. He finished 2015 on a high note and posted a career-high 109 receptions. This resulted in 1,215 yards and nine touchdowns. Fitz had not crossed the 1,000-yard mark since 2011.

At 32, Fitzgerald isn’t thinking about calling it quits. If he wants to play beyond 2016, a reasonably-priced two-year deal seems sensible. This would allow him to rightfully retire as a Cardinal.

Timmons will earn big bucks in his final contract year, ranking him as the second-highest paid linebacker behind Kansas City’s Justin Houston for the upcoming season.

While he did record a team-high 77 solo total tackles along with five sacks, Timmons’ 2016 pricey salary eats into the Steelers’ tenuous cap situation. A valuable part of Pittsburgh’s defense, the team would certainly fare better by asking Timmons to once again restructure his current contract. That is if Timmons is in the team’s plans past 2016.

Releasing Timmons, a former first-round pick from 2007, didn’t appear to be on Pittsburgh’s agenda earlier this year.

At this point in time, the Steelers are expecting Timmons, who is 30, to rebound this year.

Speaking of players earning a fat paycheck who need to pick up the pace.

At 33 years old, Jackson posted his lowest numbers since 2011 when he recorded only 33 receptions for 543 yards and three touchdowns. This is partially due to the fact that he dealt with injuries and had a rookie quarterback throwing to him.

Nevertheless, Jackson’s lofty 2016 salary doesn’t exactly match his contribution level to the team. Although, according to Rick Stroud of The Tampa Bay Times, head coach Dirk Koetter doesn’t think that Jackson is “anywhere close to being done.”

Jackson was signed to a five-year, $55 million contract in 2012 at the height of his career. After pen went to paper, Jackson’s yards and touchdowns have been on the decline ever since.

Bound to be upstaged again by third-year receiver Mike Evans, it will be interesting to see what the team’s plans are for Jackson beyond 2016.

Entering the final year of his $55 million contract, trade rumors surrounding Campbell circulated early in free agency. Though, it appears Campbell is not being shopped now, and he stands to earn $15.25 million in his eighth year with the Cardinals.

Campbell is set to be the fifth-highest paid pass rusher in 2016 unless the Cardinals ask him to extend or rework his contract. Campbell will be 30 at the start of the new season and has been voted into the last two NFL Pro Bowls.

Over the course of his career, Campbell has recorded a total of 48.5 sacks and 443 combined tackles. He posted a career-low five sacks last year, ranking him 67th in the league.

Being that Campbell occupies the No. 1 slot at his position, he is going to have to step up his level of production if he wants to convince the Cardinals he is worth keeping around after the 2016 season.

While Gilmore is looking to cash in on quite a healthy salary compared to others in his class, he is currently creating a buzz by not showing up for Bills OTAs.

Gilmore is bucking for a new deal that some speculate could be in the neighborhood of $15 million per year – like the one that Washington’s new cornerback Josh Norman recently signed.

Gilmore’s three interceptions from 2015 rank him 24th in that stat among his fellow defensive backs. A first-round pick from the 2012 NFL Draft, Gilmore has recorded nine interceptions, one fumble recovery and a combined total of 177 tackles during his four years with the Bills.

As the top right cornerback on the team’s roster, an eventual long-term deal to keep Gilmore with Buffalo would be an ideal plan. Though, the Bills might not feel inclined to deal with him until after this year.

In the meantime, the $11.082 million Gilmore will collect this season makes him the eighth-highest-paid corner in 2016.