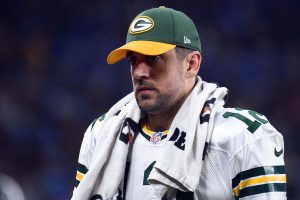 Is it possible the red-hot Aaron Rodgers is primed for letdown performance against the Cowboys? Tim Fuller-USA TODAY Sports

The elimination of four teams in last week’s Wild Card games leaves eight remaining to duke it out. With four teams that earned a bye set to take on the four squads that won last weekend, there promises to be a ton of drama unfold.

Some of this weekend’s divisional games are going to be quite tight to call. On the other hand, there is little trust that the Houston Texans will be able to compete with the top-seeded New England Patriots in the AFC.

But this does not mean that Tom Brady will have a cakewalk performance against the top defense from the regular season. Some unexpected events are sure to unravel, leading us to our 10 bold predictions for the NFL Divisional Playoffs.

Beasley improved vastly from his rookie season after lining up at outside linebacker in 2016. In fact, he finished with a league-high 15.5 sacks during the regular season. This is a clear indication Beasley should logically be on course to sack Seattle Seahawks quarterback Russell Wilson at least once, right?

Wilson’s offensive line was visibly one of the worst, if not the worst, in 2016. As a result, he endured 41 sacks. Unfortunately, that trend continued in the Wild Card round with Wilson getting sacked three times by the Detroit Lions.

Herein lies the perfect recipe for Beasley to record his first four-sack performance. This is a bold call considering Beasley failed to sack Wilson the last time the two teams tangoed.

But a lot has changed since Week 6. Wilson could be getting up off the ground much more than he prefers. This could prove difficult for the Seahawks’ offense to keep things competitive.

Speaking of competitiveness, Jones and his Falcons had the highest-scoring offense in 2016. Now, the Falcons will be paired up with a Seattle defense that ranked eighth-best against receivers

This is a defense that allowed only 16 receiving touchdowns on the season and failed to let the Detroit Lions score through the air in the Wild Card round.

As for Jones, his level of performance dipped off a bit towards the end of 2016. He also dealt wit hampering injuries that forced him from a couple of games. After two weeks of rest, Jones could be primed to top the numbers he recorded against Seattle back in October.

In that game, Jones had seven catches for 139 yards and one touchdown. We are going to call for Jones to add on a couple more receptions and chip in another trip to the end zone.

In Thomas Rawls’ Wild Card performance against the Lions, he etched some record-setting numbers. Rawls put pedal to the metal and rushed for 161 yards. His rushing yardage was the highest recorded in a playoff game in the history of the Seahawks’ franchise.

Rawls looked a lot like former Seahawks running back Marshawn Lynch as he cut through defenders and found his holes. But the young running back might not be so fortunate against Atlanta on Saturday.

In sticking with the theory that the Seahawks’ offensive line lets Atlanta get the best of it, Rawls’ production could tank. Due to the inefficiencies of this unit, Rawls’ production was all over the charts in 2016. During Weeks 16 and 17, the second-year running back put up total of 22 rushing yards on 16 attempts.

Taking this into consideration, Rawls might have a tough time channeling his inner “Beast Mode” in this particular game.

Clowney and the Houston Texans are riding high after edging themselves into the Divisional round of playoffs. This, after the Texans knocked the stuffing out of the Oakland Raiders last week. Clowney absolutely clowned Raiders rookie quarterback Connor Cook with this interception on an attempted screen pass (watch here).

Considering the circumstances, it was not too surprising that Oakland’s rookie quarterback coughed up a pick. Nonetheless, Clowney’s efforts were spectacular.

Now, Houston will take on a New England Patriots quarterback in Tom Brady who was intercepted just twice during the regular season.

Coincidentally enough, the last time Houston played in the division round was against New England back in 2013.

Brady remained clean in that matchup, throwing for 344 yards and three touchdowns.

But we are going to give Clowney some credit here and suggest that he can intercept Brady just once.

It won’t be a pick-six. It also won’t be enough for Houston to overcome the onslaught that is the Patriots.

5. Patriots shut out Texans, Round 2

Clowney might be up for another sweet postseason performance, but that doesn’t mean the Patriots will allow quarterback Brock Osweiler’s offense to score. The Texans’ offense waltzed around a depleted Raiders unit and actually looked impressive last week, winning 27-14.

However, it is still the same offense that averaged only 17.4 points per game during the regular season. Osweiler has not suddenly gotten better. Instead, the Texans were afforded the opportunity of a favorable matchup.

Now, they’ll face a Patriots squad that handily shut them out in Week 3. Notably, that was done with quarterback Jacoby Brissett under center. Facing Brady will certainly be more difficult.

Look for the Texans to put up a grand total of zero points for the second time this season against the Patriots. After all, the idea of Osweiler doing anything of substance at Gillette Stadium in January is laughable.

Brown was nothing short of fantastic in last week’s Wild Card game against the Miami Dolphins. Before the first quarter of the game was even over, Brown caught a 50-yard touchdown, shortly followed up by a 62-yard touchdown. The Dolphins’ defense looked like a bunch of toddlers chasing down a 15 year old.

In this weekend’s divisional playoff game, Brown might not find those same gaps. The Chiefs’ pass defense ranked second in the NFL in completion percentage allowed with Marcus Peters continuing to dominate at corner. Quarterback Ben Roethlisberger could make mistakes that impacts Brown. Plus, Big Ben dinged up his foot in last week’s game.

If his foot starts to bother him, the passing game will take a backseat. In turn, Le’Veon Bell would be left picking up the slack on the ground.

If the Chiefs can find a way to beat the Steelers on Sunday, it will take them to the AFC Championship Game for the first time in 23 years. Coincidentally enough, the last time these two teams met in the postseason, Kansas City beat Pittsburgh 27-24 in a 1993 Wild Card game.

In looking at the current quarterbacks’ playoff experience, Alex Smith has only played in five postseason games. This, compared to Ben Roethlisberger’s 18 postseason outings, including two Super Bowl Championships.

But interestingly enough, Smith has a slightly better winning record than Roethlisberger over the past six regular seasons.

The key to Smith’s team advancing on Sunday, will be its defense stopping Pittsburgh’s dominating offense. Fortunately, Kansas City’s defense gathered the most takeaways (33) in 2016. It could stand to trip up Big Ben who had 13 interceptions and eight fumbles during the regular year.

A good dose of defensive backs Marcus Peters and Eric Berry in combination with special teams speedster, Tyreek Hill could do the trick. In this particular showdown, defense and special teams could be the deciding factor.

The Packers should be fearing facing Elliott for the second time during his rookie season. After all, the youngster rushed for 157 yards at a pace of 5.6 yards per carry against Green Bay in Week 6.

Prior to that, the Packers had given up an average of just 43 rushing yards in their first four games. After Elliott’s devastation, the Packers’ rush defense never fully recovered. Considering Elliott completed his rookie season with a league-high 1,631 yards, he should have another field day making the Packers’ defenders look silly.

Boldly, we are predicting Elliott tops the 200 total-yard mark with at least 160 on the ground and three total touchdowns.

While Elliott is running around causing chaos and scoring more points than the Packers desire, Rodgers could get a bit rattled.

It is not often that Rodgers makes mistakes. The future Hall of Famer has not thrown an interception since Week 10. More remarkably, Rodgers has attempted 332 passes in this stretch while throwing 24 touchdowns.

We can envision Rodgers adding a couple more touchdowns to his stats in Sunday evening’s divisional showdown. But he might start feeling pressure of the Cowboys’ offense dominating his Packers’ generous defense. In doing so, Rodgers will snap his perfect nine-game no-pick streak and throw an ugly interception.

Last week, we witnessed Rodgers land a gorgeous “Hail Mary” touchdown pass into the hands of receiver Randall Cobb. What are the chances of that happening a second week in a row?

We are predicting for another one. Only with a wrinkle. Rookie quarterback Dak Prescott will toss a Hail Mary to Dez Bryant. Only this time, the officials will actually call it a catch.

We can be sure Green Bay’s secondary will be all over Bryant come Sunday evening. The nice thing for Bryant and Prescott is the Packers’ pass defense was absolutely atrocious in 2016. It give up 32 passing touchdowns and 295 yards on average per game.

Playing nothing like a rookie in 2016, Prescott is bound to dominate the Packers’ defense under these circumstances. Heck, maybe he’ll even add in a Hail Mary to Bryant with time running out in the final stanza. How fitting would that be?