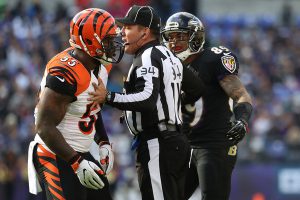 Wide receiver Steve Smith (#89) of the Baltimore Ravens and outside linebacker Vontaze Burfict (#55) of the Cincinnati Bengals are separated by referee Clete Blakeman in the first quarter at M&T Bank Stadium on November 27, 2016 in Baltimore, Maryland. Rob Carr/Getty Images

Still not a good quarterback, Barkley did everything in his power to lead the Bears to a home win over the Tennessee Titans on Sunday. He was then let down by the team’s receiving group to the tune of 10 drops, including two on the final possession, both coming on potential game-winning touchdowns.

Barkley will be lucky to be on an NFL roster at this time next season. That much is by now well known. But his Bears team, much like we’ve seen throughout the past two seasons, simply couldn’t come through with even the most basic play Sunday against Tennessee. In this, we have to feel at least a tad bad for Barkley.

And so begins the bad from NFL Week 12.

“Never doubt that a small group of thoughtful, concerned individuals can change the world. Indeed, it’s how we got stuck with the IRS, the Federal Reserve and the mafia.”

* The Minnesota Vikings may have thought that Norv Turner’s resignation as the team’s offensive coordinator would jump start this unit and create the necessary change. After all, there were some obvious differences between Turner and head coach Mike Zimmer.

Now, following the Vikings’ last-second loss to the Detroit Lions on Thanksgiving, this is obviously not the case. Interim offensive coordinator Pat Shurmur ran what has to be considered the weakest offensive game-plan we have seen thus far this season around the NFL.

Relying on passes that traveled on average less than five yards down the field, quarterback Sam Bradford failed to take advantage of a horrible Lions pass defense.

Plays weren’t called throwing the ball down the field to Cordarrelle Patterson. Kyle Rudolph was a non-factor down the seam. Instead, the Vikings were left throwing three-yard slants to fullbacks on third-and-five. No really, this happened throughout the afternoon.

All said, Bradford completed a whopping 31-of-37 passes for just 224 yards in the 16-13 loss. Way to set the NFL passing game back decades, Minnesota Vikings.

* We can talk about the Matt Barkleys and Ryan Fitzpatricks of the world not being great quarterbacks. Outside of Fitzpatrick himself, no one viewed them as above-average NFL players. That’s one thing.

But when you throw $72 million in the direction of a quarterback, you expect him to be pretty darn good. Through the first 11 games of his Houston Texans career, Brock Osweiler has been far from this.

Hosting an average San Diego Chargers squad on Sunday afternoon, most had anticipated that the Texans would take care of business. It might not have been because of Osweiler’s presence on the field, but he surely wouldn’t lose the game for the team, right?

Osweiler threw three interceptions in the 21-13 loss, including a first half pick that led directly to San Diego’s first score of the game.

Now, through the first 11 games of the season, Osweiler has thrown 12 touchdowns compared to 13 interceptions.

It is however, his latest performance that should send up warning signs from Houston. After all, the Texans now find themselves just a half game ahead of the Tennessee Titans in the AFC South. And in reality, most of that has to due with Osweiler’s disastrous inaugural season with the team.

* If it’s not one thing, it’s another for Jeff Fisher’s Los Angeles Rams. At 4-6 on the season, Los Angeles headed into Week 12 faint playoff hopes. More than anything, this has had to do with substandard quarterback play and lackluster overall coaching. Both of these things came rearing their ugly heads after the Rams blew a 10-0 late-game lead against the Miami Dolphins in Week 11.

Now, with rookie No. 1 pick Jared Goff putting up the best performance for a Rams quarterback in almost two years, Los Angeles found another way to lose. Goff threw three touchdowns without an interception in a stunning overall performance. He was, however, let down by a previously stout Rams defense that yielded 49 points and 555 total yards to the New Orleans Saints on Sunday. Ouch.

And so begins the ugly from NFL Week 12.

* How many more times does Cincinnati Bengals linebacker Vontaze Burfict have to act the part of an immature child on the football field? The latest example of this came Sunday during Cincinnati’s loss to the Baltimore Ravens.

Burfict got into it with the equally loud-mouthed Steve Smith, eventually pushing the Ravens’ receiver to the ground and then giving him a cheap shot for good measure. Once Smith got on Burfict’s face, the Bengals’ linebacker flopped in an act that would make Tom Hanks proud. Ignoring the obvious, officials threw the 15-yard penalty on Smith, not Burfict. Maybe, just maybe, the NFL should know Burfict’s act by now.

* For the third time this season the Seattle Seahawks are coming off a game in which they failed to score a touchdown. This time, it came in a brutal 14-5 road loss to the Tampa Bay Buccaneers. And in reality, it was the same old story for the inconsistent Seahawks.

If the OL aren’t going to move their feet, then you BETTER get

Russell Wilson was sacked a total of six times and hit 11 times by a swarming Buccaneers defensive front. The last part of that sentence has rarely been written around the NFL world in recent years, but it just goes to show us how bad Seattle’s offensive line has been in front of Wilson.

Some will point to the two interceptions Wilson threw or the fact that Richard Sherman was owned by Mike Evans early in the game. Both are legit criticisms. But it’s the lack of pass protection on offense that could very well doom a Seahawks team that’s now just a half game up on Detroit and Atlanta for the second seed in the NFC. Lucky for Seattle, the rest of the NFC West is a traveling dumpster fire.

* It might have come against the still winless Cleveland Browns. It might have been an ugly overall game. But the New York Giants now boast the second-best record in the NFC after winning their sixth consecutive game.

Following an early-game injury that saw him exit holding his hand, Odell Beckham Jr. returned in time to put up two scores in the 27-13 Giants win. And despite a less-than-stellar stat line that saw him complete 15-of-27 passes for less than 200 yards, Eli Manning threw three scores without an interception.

Defensively, Jason Pierre-Paul led a dominating pass rush that saw the Giants come away with seven sacks of Browns quarterback Josh McCown. JPP recorded three sacks and returned a fumble for a touchdown to put the game on ice. No one is ready to put New York up there with the Cowboys in the NFC, but you don’t win six consecutive games in today’s NFL without doing something right.
And so begins the good from NFL Week 12.

* His team might have lost a franchise record tenth consecutive game on Sunday, but San Francisco 49ers quarterback Colin Kaepernick continues to play exceptional football. Down 31-14 in the fourth quarter, Kaepernick led the 49ers down to inside Miami’s 10 with a chance to tie the game late in the fourth quarter. One final scramble as time expired saw him fall two yards short of tying the game up.

All said, Kaepernick completed 29-of-46 passes for 296 yards with three touchdowns and one interception, the latter of which was not his fault. He added 113 rushing yards on 10 attempts to go over 400 total yards for the second time in four games. All this coming against the NFL’s third-best defense.

It’s surely too early to conclude that Kaepernick has earned the right to start for the 49ers in 2017. Heck, we have no idea whether he will even be with the team. What we do know is that he’s playing his best football since the 2012 season. Sunday’s outing was yet another example of this.

* Speaking of playing great football, by virtue of their win over the aforementioned 49ers, the Miami Dolphins have now won six consecutive games and are tied with the Denver Broncos for the last wild card spot in the AFC.

Much like the Giants, it wasn’t a great overall performance for Miami. Jay Ajayi and the ground game failed to get going against the league’s worst run defense, putting up just 95 yards on 26 attempts. Miami’s defense let Kaepernick go for over 400 yards and nearly blew a three-score lead in the fourth quarter.

None of that really matters. Miami is not in the midst of a six-game winning streak and is coming off a game that saw Ryan Tannehill complete 20-of-30 passes with three touchdowns and zero interceptions. Now, over the course of Miami’s six-game winning streak, Tannehill has thrown a grand total of one interception. It’s not a coincidence that the Dolphins are now firmly in the mix for a playoff spot.

* Teams grinding out wins might have been the theme of NFL Week 12. That was magnified in Chicago where the Tennessee Titans hit .500 on the season after a late-game stand by their defense against Matt Barkley and the Bears’ offense. Though, that’s not really the story here.

Now just a half game behind Houston in the AFC South, Tennessee continues to ride the tremendous performance it is getting from Marcus Mariota. Including Sunday’s two-touchdown performance, the second-year quarterback has tallied 23 total touchdowns compared to three interceptions over the past eight games.

Needless to say, the Titans have turned the corner during that span, boasting a 5-3 record and getting right back in the AFC Playoff picture.

* The Dallas Cowboys gave up almost 200 total yards and three touchdowns in the Washington Redskins’ final three possessions on Thanksgiving. It was not the way Jason Garrett wanted to end the game on defense. And it should be of some concern for the Cowboys.

Still, Dallas came away with a hard fought 31-26 victory for their tenth consecutive win on the season. Dak Prescott tallied two more touchdowns without an interception to bring his touchdown total on the season to 23 compared to just two interceptions. Meanwhile, Ezekiel Elliott put up another 100-plus yard performance and is still on pace to tally 2,184 total yards and 18 touchdowns on the season.

Now at 10-1 on the year, the Cowboys are pretty much a lock to boast home-field advantage throughout the playoffs. And in reality, it’s these two rookies that have the team on the verge of making some history.

It also didn’t come without the Raiders yielding 25 consecutive points to the Carolina Panthers in the third quarter and to start the final stanza.
Still, much to the liking of their home crowd, the Raiders were able to get out of dodge with a win. Carr led Oakland to two consecutive scoring drives to end the game, coming away with the team’s ninth victory of the season.

Now tied with the New England Patriots for the best record in the AFC, one could make an argument that the Raiders are actually the best team in the conference. Even if that’s not the case, Carr and the Raiders guaranteed themselves their first winning season since 2002. Not too shabby.