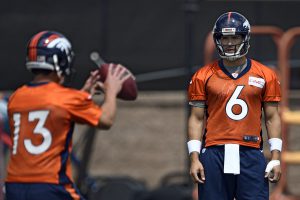 Mark Sanchez and Trevor Siemian are certainly not names we would have associated as a Denver Broncos starting quarterback one year ago.

However this is the reality in the wake of a tumultuous offseason. Head coach Gary Kubiak said Sanchez and Siemian are currently “neck and neck” in the battle for the starting quarterback job in Denver.

Noteworthy is that rookie Paxton Lynch, selected by the Broncos in the first round, doesn’t seem to be on the same page as the other two.

It is quite interesting that Kubiak views Siemian an equal to Sanchez at this point. Siemian, a former seventh-round pick from 2015, made one passing attempt in one game for the Broncos last year. Sanchez obviously has a boatload more of NFL experience, so he must not be standing out enough for the Broncos to label him as the front-runner.

Kubiak elaborated on the status of the quarterback competition.

“Those two guys are right there with each other. It’s a very competitive situation. They’re obviously ahead of our young guy right now from a mental standpoint,” Kubiak said, per Cameron Wolfe of denverpost.com.

Per Wolfe, Kubiak indicated the Broncos would hold a meeting at the conclusion of the team’s OTAs to determine whether or not they have seen enough to name their starting quarterback prior to training camp in July.

There will be more to report on this story as the NFL preseason plays out.